Going to bat for Bats at Brock! 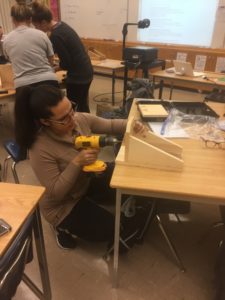 Brock University has been running an optional course on Outdoor and Environmental Education (OEE) over a number of years. Most recently two sections ran in the fall of 2017. The teacher candidates represented PJ, JI and IS levels as well as both programs, namely consecutive and concurrent education.

For one of the courses, lead by Professor Doug Karrow, the teacher candidates were engaged in intersectional learning on conservation, invasive species, local ecosystems, taking action and incorporated elements of design technology. They were immersed in discussions on the history and current of conservation in Environmental Education, and then introduced to the role of bats in our ecosystem in southern Ontario, as natural pest controllers and pollinators, among other things. They were then introduced to the invasive species, white-nose fungus, which has a detrimental impact on the wellbeing of many bat species. One response to this issue, as outline by the Canadian Wildlife Federation (helpthebats.ca) is by building and distributing discrete and condominium-style bat houses. These bat houses can be located in open spaces, often near insect-supporting sites, such as wetlands, or farm land. They provide a respite from the dampness of caves that are both “petri dishes” for fast-spreading fungus growth and often too attractive to unknowingly spore-carrying humans. More information is found through this video from Parks Canada. 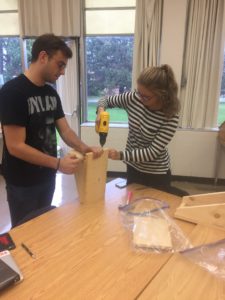 Based on this knowledge, teacher candidates were given the opportunity to build their own bat houses. The pictures here show some of the students building and then with completed bat houses, to take home and share with their community. They expressed how rewarding it was to create a tangible product in response to a very pressing local  environmental issue.

For more details on this activity, contact Doug Karrow (dkarrow@brocku.ca).